A Drupal 7 site, this site was built mostly by Adam [City Web Consultants] while on contract with Accord. Ibiza Spotlight is a very large traffic website providing everything you could need to know when visiting Ibiza, including the option to book accommodation and buy club tickets in one place. Due to the high traffic nature, a lot of coding efficiencies needed to be considered which also included integrating MongoDB as a cache backend as it out-performed Varnish in our tests. MongoDB was also used to store hierarchical data when communicating with the payment gateway and later retrieved in a fast and effective manner. It is a multi-lingual site in English, Spanish and German, and features responsive design.

This was to be a stand-alone end-to-end site build from the initial designs carried out by the Accord Group design team, through to delivering the completed site that Ibiza Spotlight would host.

The existing Ibiza Spotlight site was old and in need of modernising to grow their users and customers. The new site needed to be flexible and to allow easy management of content in multiple languages. 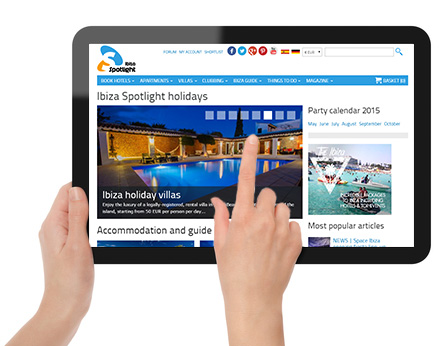 It was a relatively straight-forward build; we created a custom responsive theme that employed good use of white-space that would 'age well', as it has. Using several multi-lingual contibuted modules we were able to translate the whole site into Spanish and German as well as the base English. The complexity of this project came from the hotel room availability management integration with an external booking system. The xml data that we were to extract was highly hierarchical, it made sense to save and use the room data in this hierarchical form while allowing individual fields to be searchable. This ruled out traditional relational database design due to it's flat table structure, so we opted to store the data in the schema-less MongoDB. This allowed us to store the complete hierarchical data in its current form (in JSON format) and then search/output the data where required. This made the system simpler and hugely quicker.

This was an extremely successful project which was completed on time and the client was very happy with the result. We made a relatively complex site, but made it in a way that appeared and felt very simple to the end users and site managers. We analysed each requirement in an agnostic fashion and implemented the best solution for the problem, instead of opting for the 'traditional approach'. This meant we utilised cutting edge technologies that simplified the system, quickened development and improved performance.

Adam [CWC] was involved in all aspects of our website relaunch on the Drupal platform, including post-launch consultancy helping our in-house tech team get to grips with the new CMS. Although we handled the entire site relaunch by remote (different countries), we also met a couple of times in person - he comes across as very friendly and extremely passionate about his work.

Whatever problem or request we had for the new site, Adam was able to either provide a quick, proven solution or an elegant workaround. Our site receives heavy traffic and integrates several e-commerce apps and runs extremely smoothly and quickly because of the careful planning undertaken by Adam from the outset. I would have no hesitation in recommending him for any aspect of web development, especially at enterprise level.