Posted 2 years ago by Adam

In recent years there has been a lot of positive press around the increasing regional tech hubs outside of London, and in particular Newcastle. After finally shaking off the ties to long-gone ship building and mining industries, the North East is seeing its own renaissance with huge investments flowing across the region into various tech-sectors. The North East has been a major player in previous industrial revolutions, and I believe we can be a leader in the 4th Industrial Revolution.

Some notable mentions go to Sage [accounting software], ZerolLight [Virtual Reality] and Atom bank [digital banking] in Durham. With several highly rated universities and technical colleges located in the North East, there is a good supply of talent entering the workforce. However, the region has always suffered from the dreaded ‘brain drain’, where the most ambitious individuals head south for the promise of better jobs and higher wages. I certainly can’t blame them as I did the very same! I recently saw a graduate developer job being advertised in Teesside for £15k per year, so it’s hardly surprising that talented people just aren’t prepared to receive such meager wages. To retain and attract the best, local companies must start paying people what they are worth. 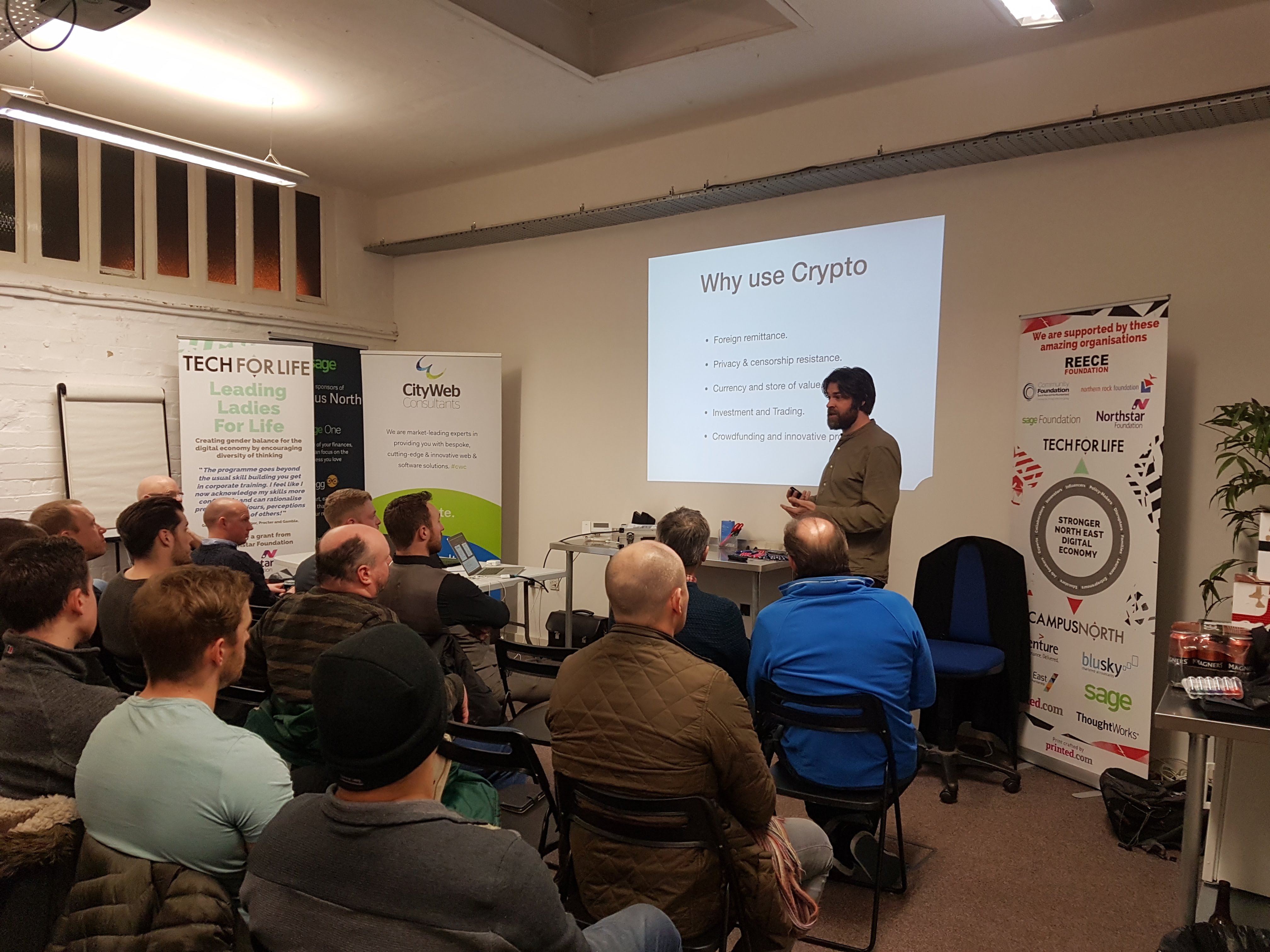 When City Web started exploring the world of blockchain and crypto-currencies in early 2017, I assumed that it would be years before others in the North East started taking interest in this emerging technology. I, like many others, assumed that the North East is always years behind the new trends in tech, but in this case I was wrong. And happily so. As we speak I am currently seeking a 3rd venue to host our monthly Blockchain NorthEast meetups thanks to an ever increasing group of interested attendees. We keep exceeding the max capacity of each venue! I had to suspend signups three weeks before the previous event due to it being so over-subscribed. This is highly encouraging, and it’s not just the general public who are keen to be involved. We’ve had representatives from large organisations such as Sage attend the meetups, and benefit from the talks as well.

Aside from the talks on trading, mining and the social benefits of crypto-currencies, there has been a growing demand for dedicated developer workshops. We will be hosting these in the near future, so please keep an eye on the meetup group for further details if you would like to attend.

Beyond our own events and initiative, there is also the Durham Blockchain Conference taking place on the 10th February which will feature many big names in the tech industry, such as Mattereum, Sweetbridge, IBM, Humaniq and beyond. It is a full day event covering everything from ‘Blockchain’s Implications for the Nation-state’ to ‘Harnessing Token Economics for Supply Chains’.

Bitguru.co.uk is a crypto news site setup by 2 guys in Darlington (Guy Winter and Justin Sizer) and after only 7 months online now attracts 200,000 visitors per month!

Please do not hesitate to get in touch if you have any further questions or queries regarding events, people of interest, or to find out how Blockchain technology can help your business.